Home In The News Name, Image, and Likeness: September Trends

The Need for Numbers, NIL for Good, and Emergence of Platforms Specific to Universities

September ended quite spicy. We had a congressional hearing on the 30th to discuss federal NIL legislation. The day prior, the National Labor Relations Board General Counsel Jennifer Abruzzo issued a memo stating her position that some collegiate athletes are employees under the National Labor Relations act and therefore are afforded all statutory protections. Finally, Senator Richard Burr introduced legislation, NIL Scholarship Tax Act, that states that athletes that make over $20k in NIL compensation are subject to taxation on their athletic scholarship.

While all of these may have huge implications for collegiate athletes moving forward, I’m not ready to write about any of them. However, here’s a short synopsis:

Congressional Hearing: While it seems everyone agrees that a federal bill is necessary, the contents of it is still up in the air. I can’t imagine that we will have one passed this school year.

NLRB Memo: I’m not sure of the immediate implications of this memo but it is definitely another hit against the NCAA amateurism model and demonstrates, once again, that the government no longer has the NCAA’s back.

NIL Scholarship Tax Act: Burr states, “It’s critical that we help protect the successful collegiate sports model that has provided students with educational and professional opportunities for more than a century.” I can’t be the only one missing the connection between protecting the college sports model and taxation on athletic scholarships for exceeding an arbitrary threshold in NIL earnings. From my non-legal background, I don’t see this bill going anywhere anytime soon.

Onto the Fun Stuff…

The Need for Numbers

Call me impatient, but I’m ready to analyze some data to better understand this industry and make more projections of where we’re headed. While I’m grateful that INFLCR and Opendorse have put out some industry insight reports based on the disclosures by the athletes of the schools they’re partnered with, it’s definitely nowhere near a complete picture of what has transpired over the past few months.

Regardless of the completeness of the data, football athletes have been the early leaders in the “NIL race” for both the number of transactions and the amount of compensation. This was easy to predict, especially given that football is the first revenue-generating sport to compete after NIL reform went into effect.

As we progress through fall, I anticipate there will be a massive spike in NIL transactions and earnings. There may be ambush marketing around the bowl games (and I’m interested to see, in time, if the bowl hosts try to implement something similar to Rule 40 at the Olympics). Also, there will be a spike in partnerships between brands and basketball athletes as we get closer to their season.

The “seasonality of NIL” will be an interesting trend to follow. While national partnerships may be for a full year or even multiple years, the majority will likely be for the few months that the collegiate athlete is most in the spotlight: during their season and peaking right before a championship run. 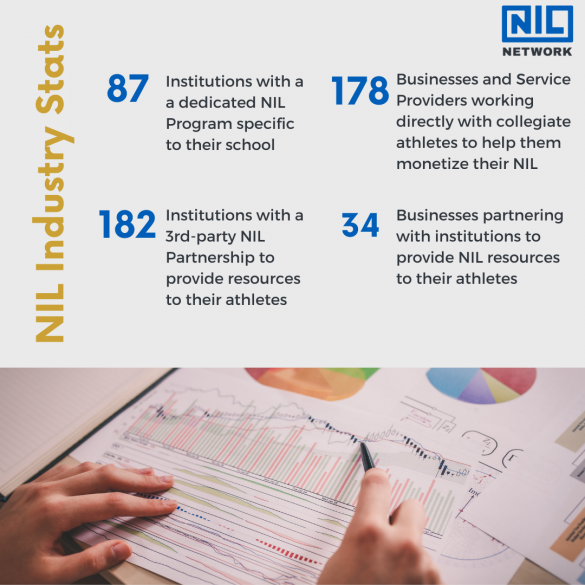 Collegiate athletes continue to impress me by hosting clinics in their community, donating NIL earnings to charity, and using their NIL to fundraise for amazing causes.

Rachael Lukacs, Georgia Gymnastics: Rachael is working with Iconic Leos to design her own leotard; all proceeds will go to Lydias’s Place which is a local nonprofit that helps young adults who have experienced foster care or homelessness.

Want to see more NIL For Good Stories? Check them out here.

In 99% of institutions, any employee of the university is prohibited from arranging NIL compensation for current or prospective athletes.

However, a trend is starting to emerge: Donors, alumni, and even a local Chamber of Business are popping up platforms to help athletes of a specific institution (or even a specific sport/position within a university) to monetize their NIL.

As a former D1 collegiate coach, the development of this trend makes my head spin.

The positive part of me thinks it’s a fantastic idea and a great opportunity for fans to support their favorite schools without breaking the bank.

The strategic side of me sees the massive recruiting advantage this provides: If an athlete is choosing between a school with a platform like the ones listed above and one that doesn’t have one, does all-but-guaranteed NIL earnings sway them? While guaranteeing NIL compensation is impermissible by the NCAA’s interim policy, these “super fans” don’t have much, if any, accountability. While we had dozens (maybe hundreds) of “bag men” providing under the table compensation before, now there may be thousands of people sliding into a prospect’s DMs. Also, similar to the facilities arms race, will we see these groups continuing to “one-up” each other on who can provide the most guaranteed compensation? I can see this being a massive source of pride for donors, alumni, and superfans.

Finally, the motherly part of me is deeply concerned*. These initiatives get superfans closer and more directly involved with athletes than they’ve ever been. Star collegiate athletes have already dealt with the “dark side” of being a public figure prior to NIL reform. Does a superfan donating to their favorite team empower them more? Does that fan feel more entitled to send an athlete a nasty direct message after a poor performance, referencing that they’ve “given them money”? Unlike businesses that are partnering with athletes, or even whole teams, an individual doesn’t have the same accountability.

On the flip side, will the athletes feel increasingly indebted towards fans and compelled to engage more outside of the agreed upon terms? Whether this additional pressure would come internally from the athlete or externally from fans demanding their attention, collegiate athletes are already near both their physical and mental capacity.

I hope I’m wrong but I’m worried that an unintended consequence of these platforms is the exasperation of issues that have already been around in the social media era.

*Division Street and Happy Valley Talent don’t appear to have the fanfunding element so I’m less concerned with them.

Looking forward to a busy October and seeing what trends continue and any new initiatives that launch!

Coaching in the NIL Era: Keys for Protecting Your Athletes’ Eligibility